KANEKO Chalin talks about the original music experience | The interview is now available!

In this corner, we delve deeper into the artists by interviewing them about their personalities and their original experiences with music. This time, we ask KANEKO Chalin, who just released his 1st single "A Lucky yellow vehicle to arrive" on October 20, about his inspiration for music.

KANEKO Chalin : I'm usually a researcher. "I'm a father of three children, the youngest of whom is in the second year of junior high school, so I feel like I'm almost done with child-rearing. I've been living in two places, Okayama for the kids and Tokyo for work, but I haven't been back to Okayama for about two years because of Corona. I'd like to come back to Okayama soon and stay there a little longer.

- You're a researcher and a musician, and you have two bases, one in Tokyo and one in Okayama, so you seem to be ahead of the times.

There has been a lot of attention paid to concurrent jobs and side jobs, but I don't think much has changed since the old days. People used to play baseball on a grassroots baseball team while working, or hold a position in a neighborhood association. Even if you are working, you are still a father or a mother, which means that everyone who has children is also working. The only difference is whether they get paid for it or not, but in terms of using their time to do something, I think it's the same. I'm not just doing research and music, I'm also working for a couple of non-profits, playing music, taking care of my parents, and I'm a father. I don't think that's a new thing. This is definitely thanks to the Internet. I can work from anywhere, and I can talk to people from anywhere. I often go to Iwate and Miyazaki prefectures for work, and both are very comfortable, so I may end up living in four different locations.

- Please tell us how you started your career and the origin of your artist name.

KANEKO Chalin : From the end of my college years to my 10th year in the workforce, I played in bands with my friends and wrote songs, but after I had a child, work and child-rearing became too much for me and I couldn't play music anymore. I have about 2,000 CDs, and even if they cost 2,000 yen each, that's 4 million yen. Even if each CD costs 2,000 yen, that's 4 million yen, so I think that's a lot of money to spend. It's enough for four mini cars.
My younger son started junior high school, so I had a little time on my hands, and I was home a lot because of the Corona disaster, so I started playing the guitar. I wrote about 100 songs in about a year. Well, there are many songs that I can't do anything about. I don't really know why I'm writing songs. I feel like I write songs just like I eat or sleep.

KANEKO Chalin : The "Cha" in the artist's name "Chalin" comes from the haiku poet Kobayashi Issa. I love Issa's unconventional and yet simple point of view when he captures the world and people's emotions, and I always keep a collection of his haiku by my bedside. I chose "lin" because my surname is Kaneko, and I thought that the combination of "money" and "chalin" would make an interesting sound. The Kanji for "lin" means "the beautiful sound of balls touching each other," so I thought it would be a great name for someone who is into music.

- Please tell us about some of your influences and your own musical roots.

KANEKO Chalin : I became obsessed with music when I heard Billy Joel's "52nd Street" in my brother's room when I was in the first grade. "I was like, "What the hell, this is cool. It was totally different from the Japanese songs I had been listening to. From that point on, I was hooked on music. My first hero was Bruce Springsteen. The first concert I ever went to was a Springsteen concert at Yoyogi National Gymnasium when I was 15 years old. I ripped off my jeans, wore a jean jacket, and went to a concert that lasted over 3 hours, which was quite an adventure for a 15 year old. I think Springsteen had a huge influence on me, both in terms of songs and lyrics. You listened to a lot of American rock and roll like Tom Petty, Jackson Browne and John Mellencamp. By the time I graduated from junior high school, I was listening to Robert Johnson and Louis Armstrong. By the time I graduated from junior high school, I was listening to Robert Johnson and Louis Armstrong. I listen to all kinds of music, regardless of genre. As I got older, I started listening to a lot of music outside of America. I listen to African music, Irish music, Brazilian music, Jamaican music, of course, and classical music. I still listen to American rock music like Springsteen, and soul music like Otis Redding. I think it has a lot of influence on my songwriting. I also listen to a lot of jazz. When I'm busy and tired.
After that, it's The Band. If I was born again, I'd like to be the sixth member of The Band. I know I'll never get there, but I also love Joni Mitchell in the early days. The way she spins one melody after another draws me in no matter how many times I hear it. In terms of songs, I also love Paul Simon.

- What is the most important thing for you in your activities now?

In "A Lucky yellow vehicle to arrive," I wrote a song about understanding my father's sadness and feeling the sadness of my own adulthood.

- What is the single "A Lucky yellow vehicle to arrive" about?

- Please tell us about any episodes in the making of "A Lucky yellow veicle to arrive".

KANEKO Chalin : I thought it would be difficult to arrange the song because it was originally a fark rock song and the demo soundtrack was just me playing chords on my guitar. I felt bad for the arranger, Igarashi-san. But I was really interested in seeing how my songs would turn out, and I was really enjoying it, so I basically decided to leave it to him. At first, the arrangement was more like folk rock, but the arranger Igarashi-san said he wanted to change the rhythm a bit, and I don't know if I should say this, but he wanted it to sound like Toto. Personally, I was excited to hear Jeff Porcaro's rhythm on one of my songs! I was so excited. I used to play the drums in a band when I was younger, but I would never have been able to play the rhythm myself. I really felt that Igarashi-san was the best. I also really like the piano, which is a little blues-like. During the songwriting session, I went to Igarashi-san's studio, and there was a Rainbow on the wall, and I remember we had a lot of fun talking about it. I remember we had a lot of fun talking about Rainbow. After that, I wrote a ballad-like song about Rainbow. It has nothing to do with the song....

- Who do you want the work of "KANEKO Chalin" to reach or listen to?

KANEKO Chalin : As I said before, I want to write songs that are simple and seem to have existed for a long time, so I'm hoping they'll be the kind of songs that you casually hum to yourself in the bathroom, or that you suddenly hear in your head before going to bed. A lot of the songs I've been writing lately have been difficult, so I'd be happy if you could listen to them in a way that doesn't require too much effort.

- Please tell us about your future prospects, ideals, and goals.

KANEKO Chalin : There's a social network called BandLab where music production lovers from all over the world gather, and I upload the songs I write to it. I'm happy when people from all over the world listen to my songs and tell me they're good, so I want to write more and more songs so that everyone in the world can hear them. I want to write more and more songs so that everyone in the world can hear them. It's really something that I couldn't have imagined in the past, to be able to make friends all over the world who are making music.
I'd like to make a place like Big Pink's house and studio, where we can get together at night, play and record music, and create good songs. I'd like to create a place where people can come together. It would be interesting to connect that place with the world through SNS.
I'm a workaholic...my day job, that is. Recently, one of my friends asked me, "Why do you work so much? I was asked by a friend. That's when I realized that for me, work is an extension of club activities. In club activities, you work hard even though no one tells you to, and I think that if everything in my life was like a club activity, I could get into all kinds of things. So I hope I can do music like a club activity, just like I did when I was in my first band. I'm sure the people at the label would be upset with me. But I dream that I want to be in a band that is like a club, connected to music lovers all over the world. 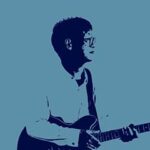 PROFILE SINGER-SONGWRITER A researcher in the field of education and a professor at a univ ...